A lot of inspiration for the electronic music I make comes from entropy. Specifically, the interaction between nature and man-made objects that have been left to decay, such as wrecked cars and industrial equipment. For example, several years ago I discovered some massive industrial 'Maloney transformers,' in a thicket of alders. I used them in the artwork for my album 'Circuit Zero': 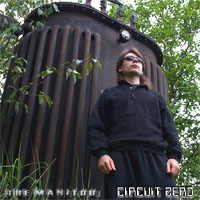 Over the years I've collected field recordings of industrial junk being struck, scraped, kicked, etc... for use in my music. Unfortunately the Maloney transformers have long-since been scrapped, but they live on in photographs and some VHS-C footage.

I live in an area which used to be a gold-mining town, so it's rich with old relics lurking in the woods if you know where to look. There are also countless abandoned cars and pickup trucks that have been vandalised, crushed, or reduced to burnt-out shells.

Mid-June I discovered a long-abandoned industrial site. Not only was it littered with a collection of wrecked cars, but also remnants of industrial equipment of unknown purpose, concrete footings, and a shipping-container that had once been an operations shack. The site has yielded some interesting photographs and film, and a plethora of great sounds as well.

These striking objects appear to be furnace boxes. The bottom halves are lined with firebrick. The upper halves must have been used to heat some kind of liquid. Note the white material peeling away from the exterior: I'm fairly sure it's asbestos, so I didn't want to get too close to these things! The white marks on the lower-halves are paintball splatters. 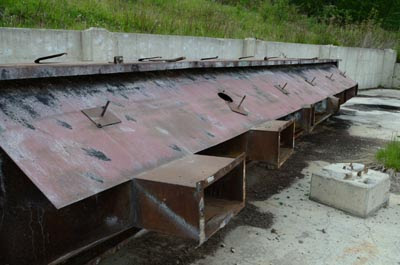 This contraption is lying sideways. Inside is a cylindrical sieve-like contrivance, and just out of shot on the left is a large sprocket and chain assembly for rotating the cylinder. As you can see there are various openings through which reverb can be recorded. I expect I'll spend more time with this on future visits. 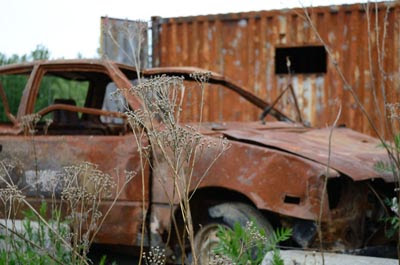 One of at least ten gutted cars dotted about the property. The charred remnants of anything flammable, including batteries, were found strewn about. These wrecks yield great sounds as well. The bonnet of this one still opens and closes (if not to factory spec!), and things like filler caps, leaf springs, loose bits of metal, etc... are always worth investigating. In the background you can see part of the truck container. 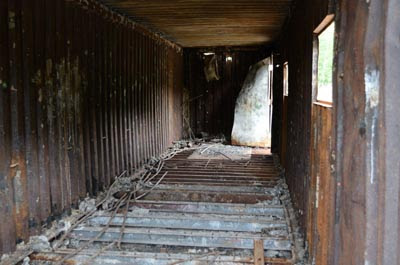 Here's the interior of the container. Great reverb possibilities here too. 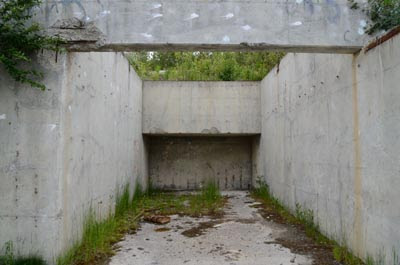 This is some kind of loading bay, set into the hillside. The opening in the top is at ground level beside a giant pile of white clay-like soil. It's wide enough to park a truck inside which I presume would have been loaded from the top. The alcove at the back is tall enough to stand up in, and produces nice shallow echoes. The sound varies depending where you stand within the structure. Hand-claps sound amazing. Lots of possibilities for this as well! 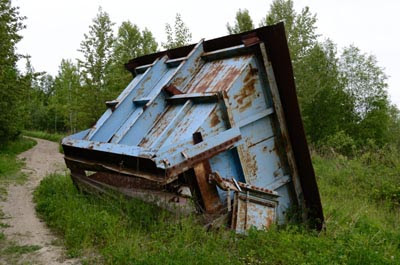 I have to wonder if this hopper used to stand on top of the loading bay. It's hollow and open at the wide end. In the lip of the part that touches the ground, one of the i-beams is partly severed at both ends. When struck, it produces a wonderful metallic ringing sound which reverberates inside the space.

I've shot some very basic HD footage here, which I hope to compile into a promo video for an upcoming single. More on that as things develop.
Posted by The Manitou at 8:33 PM