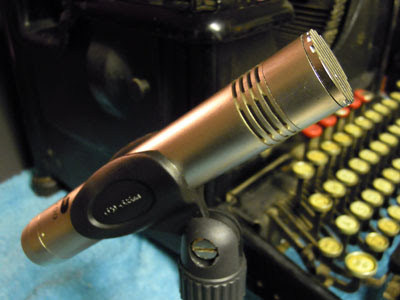 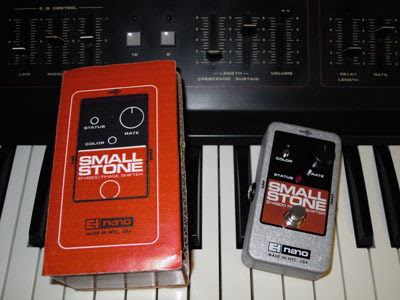 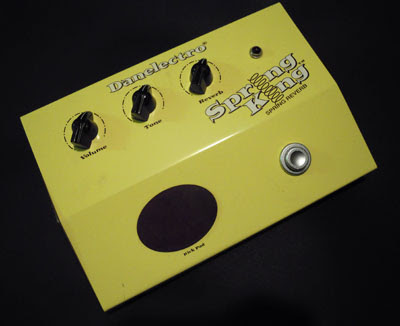 Danelectro Spring King. I have something of a fascination with the sound of springs. I even went so far as to build my own spring reverb out of a small slinky and a poster tube once, but it didn't work very well without amplified input and I never got around to building an amp for it. So, I bought this instead. It has its own built-in amp circuit, some real springs, and a digital delay circuit inside: all to emulate spring reverbs found in vintage guitar amps (and, as a friend of mine reminded me, found in the ARP-2600 synthesizer). I doubt very much if a guitar will be going anywhere near this. It will mostly be used with my synths, keyboards, drum machines, and circuit-bent devices.
Posted by The Manitou at 9:37 PM No comments:

Well, things have been a little quiet here but I've not been idle. I have several posts in the drafts folder awaiting completion, and have been busy behind the scenes on several projects.

I'm about to start work on a soundtrack project, for a show to be released by Gypsy Audio. Beyond that I can't really say much, as I don't wish to give away any spoilers. Suffice to say that everyone involved with the project is excited about it and anxious to get started. As with Tales I'll be keeping records of my work, but won't be posting about it until the project sees a release.

Wish me luck!
Posted by The Manitou at 5:35 PM No comments:

The first auditions for the Tales Audio Drama are now over, and all roles for episodes 1-3 filled. I won't say it was an easy process. There were times I felt a cast wasn't going to gel. But overall it's been a success and the scripts have all been sent out.

Having characters that are very close to my heart brought to life is a mixed blessing. They've been part of my life now for almost ten years. I've come to know them inside and out; to hear their voices in my head. To match an actor to the voice is no mean feat - especially with a limited number of applicants. I've been very lucky though to attract some amazing talent to the project. The voices might not match my vision 100%, but the characters will forge new and exciting paths, in the hands (mouths?) of their new caretakers.
Posted by The Manitou at 10:07 PM No comments:

Another transition piece for Tales Episode 1, 'Turned To Stone' marks the demise of the Troll Tree Removers after they're petrified by the sun's rays. I wanted it to have a haunting quality. The first idea that came to mind was the sound of tingsha (Tibetan prayer cymbals). These are small cast bronze cymbals on a leather strap which produce a high-pitched ringing when struck together. They're more like bells in that respect. Each cymbal is supposed to sound identical, but possibly mine are slightly out of whack because they produce some harsh harmonics. This just adds to the character though, making them all the more suitable for this track.

I started by recording several takes into my CAD mic and selecting the best ones. If the cymbals wobble about too much you get a wobbly-sounding recording, so after some experimentation I got some clean takes. You can be sure I kept the wobbly ones too, though - you never know when they might come in handy!

I loaded the sample I was happy with direct into Sonar (my multi-track software) and repeated it every couple of bars. I applied reverb to soften the sound a little, but had to tweak it quite a lot. Certain frequencies were bouncing around and sounding horrible. This served as my guide for adding other instruments.

Next I added a plucked spring sound, sampled from my 'Spring Thing' which is nothing more than two dishwasher springs mounted on a board. But hooked up to a contact microphone it sounds fantastic. This already had a reverb all its own, but I added extra software reverb and it totally stole the show. 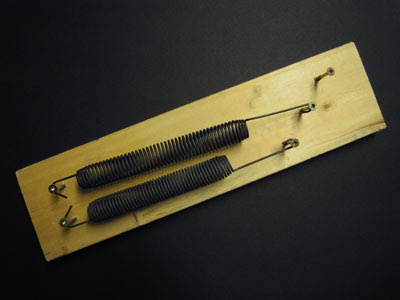 For the third element I turned to the K-Station synth, with the intention of adding a slow, bright, metallic arpeggio. My tweaking produced a detuned sound - not unlike bells that have been really messed up - more suited for melody, so a melody it was. In an attempt to fit melody to tempo, I threw in a bass-drum sample to play to. That lead to the mimicked sound of a slow hearbeat, which echoes the plight of the poor trolls and further enhances the track.

Oh yes, I almost forgot about the growls. I took a sound from my modified Yamaha PSS-140 FM keyboard and pitch-shifted it way low in shortcircuit. To me it sounds like the growl of an alien animal. No real reason for adding it except that it adds some spookiness.

By then the track was pretty much finished, to my mind. But there's always the temptation to add more, and later on I thought of some string parts and had to try them out. I called upon my trusty Crumar Performer analog string synthesizer for this. I dropped the bottom and mid-range out via the on-board EQ, and modulated the pitch. The latter is a trick I used on the Doctor Who: Mechalution soundtrack / Let's Build Mecha e.p. to give the strings a wailing, melancholy quality, not unlike tape-wobble.

The final element I added was a Chinese woodblock (also called a 'wooden fish'). This was again recorded using the CAD. It sounded too bright in my first version so I pitch-shifted it about an octave lower and EQ'd out some high-end.
Posted by The Manitou at 7:52 PM No comments: