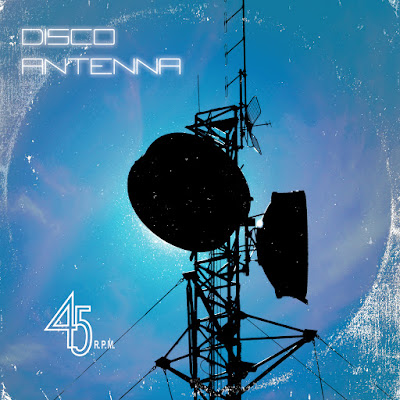 It's been a busy creative year, and there are many releases I'm involved with waiting in the wings. Disco Antenna's first full-length album is almost complete. To tide you over, we've released something a little different: The Vinyl Experience EP.

It's been a dream of ours to have our music on a vinyl record, and this year we got the chance to have two lathe-cut vinyl records made (one for JLA and one for myself) at littleelephantlathecuts.com who I highly recommend if you're looking to have something like this made. Mastering for vinyl was an interesting process, and although it didn't turn out perfect, it came pretty close. These lathe cuts are of fantastic quality, and can be ordered in batches or one-offs, making them far less expensive than pressed vinyl (which are usually bulk-order with a long waiting time). They still aren't cheap, so it's not cost-effective (yet) to produce enough to sell.

To share the experience of playing one of these special gems, the vinyl has been digitized and EQ mastered, with all pops, clicks, hisses, and hums left intact for that authentic vinyl experience. The resulting recordings make up The Vinyl Experience EP and accompanying videos of the digitizing session. The EP is yours for free via our Bandcamp page.

My plan to finish the new Manitou album in February was scuppered by a bout of the flu, which prevented me from singing for the rest of the month. I'm now back at work on No More Cries' debut album.

One project I was able to find time for was a remix for an old friend who's put a new industrial/EBM band together called Zwaremachine. Their minimal approach gave me plenty of room to add melodies and other sonic goodness. The song is called 'Our Revenge', and (for now) can be heard exclusively on Ghost Wave Radio Show #20. It's the second song. It was such a fun track to work on, so I hope you like it!

Zwaremachine's E.P. 'Be A Light' comes out on May 1st, on CD and cassette no less. But in the meantime, you can preview three tracks via Bandcamp, and find various other teasers on their FaceBook page.

Waaaaay back when I was first on the lookout for a synthesizer ('95?), and all I had at my disposal was a cheap-and-cheerful 'Realistic' brand PCM keyboard, I spotted what I'm pretty sure was one of these (or perhaps the 6-voice model, the DW-6000) in a pawn shop. Fate conspired to not let me have it, and in all honesty it's probably just as well: I wouldn't have known what the hell to do with it at the time.

Lately this synth has been in my consciousness, thanks to various demonstration videos and online discussions that have come my way. Then, lo and behold, the very synth pictured above (including the funky-looking road case) came up for sale a few hundred kilometers away. So I made an offer and it was put on the bus. This post is not so much a review as some observations, my first impressions of the machine, and how it compares to some similar synths I already own.

I own two synths that share a similar architecture and vintage to this: the Roland HS-60/Juno-106, and Roland Alpha Juno-1. So I was expecting something of a mish-mash of these with some characteristics of its own, and so far that is my impression. Let me expand on that.

The DW-8000 is damn near the same size and weight of the HS-60 (ie. it weighs as much as a small planet), and the plastic upper casing reminds me so much of the Juno-1. The Junos mentioned both have DCOs (Digitally Controlled Oscillators) paired with analog signal-paths (amp, filter, etc...). Thanks to some kind of Voodoo, the DW-8000 has sixteen digital waveforms to serve as sound sources, along with an analog amp and filter.

The HS-60 has a marvelous resonant filter with self-oscillation; that is, if you turn the resonance up you get a piercing sine-wave added into the mix. The Juno-1 did away with this feature, which made things just a little bit lacklustre for me. I'm happy to say the DW-8000's filter does self-oscillate, and that's another mark in its favour.

There's not much point in comparing the controls of the DW-8000 to those on the HS-60, but there are similarities to the Juno-1: a series of buttons for choosing parameters paired with one master control for affecting changes to these parameters: a weighted dial (the 'Alpha Dial') on the Juno-1, and a slider on the DW. I have to say that I prefer the slider, and have not found my initial foray into programming the DW-8000 as tedious as expected.

If I have something negative to say about the DW-8000 it's about the keys. They are overly noisy (mechanically), and the spring action (though quick) is like you might find on a cheap organ. Perhaps I'll get used to it.

My particular DW-8000 still has the original (30 year-old) lithium battery for keeping the patch storage alive. One of my first priorities is to fit a new one. It also has a cigarette burn in the upper two keys that dates back to pre-1988 (when the previous owner bought it). I'm going to assume it also came from a smoker's studio, because it was covered in a film of brown tar when I acquired it (the innards are similarly stricken).

With my HS-60 in need of new voice chips, the DW-8000 has taken its place in the studio for now. I look forward to getting to know its sound and character through future projects.

Posted by The Manitou at 8:31 PM No comments:


Here's an update on my projects for the first quarter of 2018.

A lot of work has been done on the five remaining tracks for The Manitou's next 'proper' album (ie. not a soundtrack or an instrumental collection). Recording of the vocals was interrupted by a New Year's cold, but I'm just getting back into that now, so I'm hopeful for a February release. Some of these songs go back as far as 2014, so it's three years in the making, but a lot of the intervening time has been devoted to other things.

The album closer has seen a shift in writing style, and it feels good to be finishing at last and moving on. That said, the follow-up album will likely consist of songs from my aborted 2010 project 'Blips And Bleeps.' There are some good songs there that just need revisiting with fresh ears and a fresh perspective.

My band No More Cries has adopted a new drummer. We are currently at work on overdubs, vocals, and mixing of the album's worth of material recorded last year, and looking ahead to record album number two now that the band is a complete entity again.

I was asked to remix a song for Zwaremachine, having remixed a song for band-member Mach Fox many years ago. I took care of this over a weekend and found it a refreshing break. Stay tuned to the blog for details of the release.

Disco Antenna's debut album is complete bar the final mix. In the meantime you can hear both 'sides' as E.P.'s on our bandcamp page. We've chosen two songs for our next E.P. that we hope to work on later in the year.