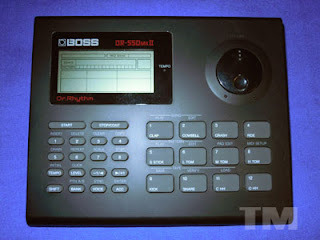 To hear what the DR-550 sounds like, I recommend checking out this page at Cyborg Studio* where you can preview the kit from the unexpanded machine, and also purchase the sample pack if you desire. *Please note I'm in no way affiliated with Cyborg Studio, but I think their site is pretty cool.
Posted by The Manitou at 5:30 PM No comments: