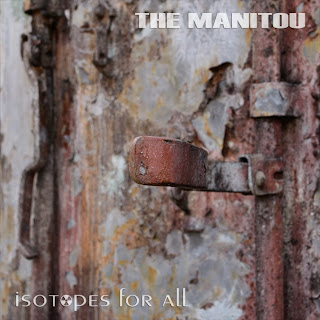 
96.1Mhz, an experimental 'atmosphere' was included on the e.p. to break up the two different versions of Isotopes Part 2. It consists of a recording of radio interference augmented by sound effects from the Korg Monotribe.
Posted by The Manitou at 12:10 AM No comments:

Now that I'm getting a handle on this whole video thing, I'm illustrating some older material and posting it on Youtube. First up is a mix of video and still images accompanying my ambient track 'Rust And Bones' from the 'Let's Build Mecha!' e.p.

It features photographs from two locations shot on my wanderings in 2012. Burnt and rusted car parts, and an entire car body with the twisted remains of a bicycle on top that had been torched like some Pagan effigy. The car in question has since been hauled away, so these photos serve as a document to its downfall.

Perhaps this presentation will give you a glimpse into what inspires my music and art.

Posted by The Manitou at 2:22 PM No comments:

Mark Barton has reviewed Electro Magnetic on his blog The Sunday Experience. Here's what he had to say about it:

Sounds so Kraftwerk that we half expected to find their name tags ironed upon its collar, new from the Manitou who regular readers with long memories may recall we mentioned in passing a little while back via tales from the attic volume XI I believe wherein he was going through something of a classic 60’s BBC Radiophonic Workshop Dr Who workout meets Vernon Arts Lab and John Carpenter via a rather fetching outing entitled ’the Mechanicals’. The Manitou for those not quite up to speed is the guise of British Columbian based electronic wizard Joshua Blanc who surrounded by all manner of analogue synths and vintage sound devices occasionally sees fit to issue forth sonic intermissions into the big outside world. ’electro magnetic’ be his latest salvo. In short this is the sound of the future as it was or at least sounded way back in those black and white days of ‘77 or more pertinently – are we really allowed to say this – a robotoid Dusseldorfian wet dream – I guess not – but too late its done. All at once finitely designed, meticulously engineered and powered onto a hyper chilled lunar mainframe which aside being just a tad frisky and fluent in the way of kraut kosmiche appears as though a mid 80’s Cabaret Voltaire were secretly fashioning out little man machined Karl Bartos replicants. ’nibiru’ on the other hand once whirred into view slow peels its coldly minimalist outer shell to assume some deeply technoid trimmed funky electro noodling much sculptured in the lounge lilted romantic cool coding of a mellowed Vangelis. http://www.themanitou.bandcamp.com/album/electro-magnetic
Posted by The Manitou at 5:11 PM No comments: 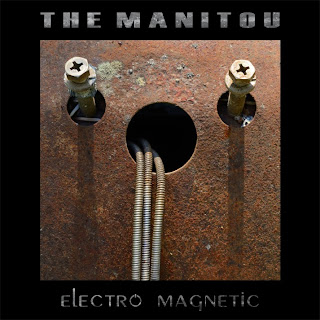 Leading up to the release of my new album, I'll be releasing a series of free two-track singles. The first of these is Electro Magnetic/Nibiru. It will be available for free on my Bandcamp page until the next single is released (at least two weeks).


Electro Magnetic was inspired by the knowledge that electromagnetic frequencies (EMFs) are buzzing around us almost constantly in our technological society. Far from being gloom-and-doom, however, Electro Magnetic is an upbeat electropop song with minimal vocals and a focus on synthesized percussion and electronic rhythms. I came up with the idea when I was walking in the woods, and recorded some hand-percussion into my digital recorder so I'd remember it. It was later re-created in the studio. The sounds were created on Novation K-Station and Roland HS-60. The Crumar Performer is also featured on the bridge, and the Boss DR-550 provided the tom-toms.


Nibiru began as a bass sequence on the Korg Monotribe. I recorded an improvisation of various filter and LFO tweaks as a single take and constructed the rest of the track around it. Also featured are the Roland HS-60, an arpeggio from the K-Station, and some Speak & Spell percussion samples. The title was inspired by a phantom sun purportedly hiding behind our own.


Also included is a single edit of Electro Magnetic, which omits the extended breakdown. It essentially follows the same structure as my original demo.
Posted by The Manitou at 11:48 PM No comments:

This year mark's the 30th Anniversary of Gary Numan's classic Warriors album. To celebrate, Numanme has put together the Warriors Tribute project, featuring fan covers of songs from the album. For my contribution I decided to cover a song called The Tick Tock Man. It's not my favourite from the album (that would be This Prison Moon), but it's a well-crafted and oft-overlooked tune I thought could do with some exposure.

For those of you not familiar with it, here's Gary Numan's 1983 original, courtesy of YouTube:


And here's my re-interpretation:


The bassline and a lot of the melodies were made with the Novation K-Station. Chords and pads are Roland HS60. There are some 'big 80s drums' courtesy of the Boss DR-550, some Speak & Spell percussion samples, and the rest of the percussion was synthesized from scratch. The Spring Thing Mks. II & III can be heard on the intro and outro, and the Crumar Performer provides some strings. I should also mention an Alesis SamplePad was used to record the tom-toms. I've not had a chance to write a post about that piece of equipment yet.

My good friend Jimmy Aaron sang the backing vocals, doing a good job of the parts originally sung by Tracey Ackerman. The rest of the vocals and the vocoder fell to me. This song isn't really in my key but I think I did a reasonable job.

Word is that the Warriors Tribute will be a professionally printed 2CD set limited to fifty copies. The contributing artists each get a copy and the remainder will go on ebay to cover the cost of manufacture. If you miss the opportunity to get hold of it, you can download my version of The Tick Tock Man from my SoundCloud page (for free, of course).
Posted by The Manitou at 9:26 PM No comments: