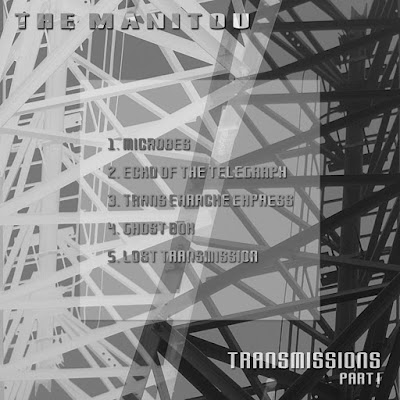 While I was working on Radioatomic, I had a few offshoot ideas that further explored the radio theme, to the point of incorporating snippets of distorted radio transmissions into them. This was the loose concept behind 'Transmissions.' The project has since morphed into a home for 'orphaned' experiments that came about from tinkering in the studio. I foresee a series of EP's of this nature, with a full album as soon as there's enough material. For now, you can grab Transmissions Part I here, or stream from the player below:

1. Microbes - Testing some new equipment gave rise to this Frankenstein's Monster of a track. I never quite knew where I was going with it from one minute to the next. While searching for a title, I found an old educational film about bacteria; a monologue from which tied everything together.

2. Echo of the Telegraph - The Korg MS-20 synthesizer is equipped with CV (Control Voltage), and can be patched in such a way that it effectively plays itself. The usefulness of this is very limited, of course, but it leaves your hands free to shape the sound while it's blooping merrily away. One such improvisation forms the backbone of this track. To that I added TAL U-No-LX (melody), Crumar Performer (strings), cymbal, and synthesized percussion.

3. Trans Earache Express - Of the many recordings of trains I've made, I had one striking passage I wanted to build a song around. I called upon the Korg Monotribe to provide bass accompaniment (recorded live), and added a little percussion.


4. Ghost Box - In 2013 I worked on a soundtrack that could be described as steampunk-meets-chorale. I think it's one of the best things I've done, so I hope I'll be able to release it someday. This song shares some of the sonic characteristics and overall mood, with the exception of vocals and snippets of radio recordings. A 'ghost box,' in case you're wondering, is a radio wired to constantly cycle through frequencies in the hope that spirits will vocalise through it.

5. Lost Transmission - Written around the same time as Ghost Box. I took a lengthy recording of a transistor radio tuned so that the signal stuttered, and played it back at half-speed through a digital emulation of tape delay. I then came up with something complimentary on the Roland HS-60.
Posted by The Manitou at 8:48 PM No comments:


One more video for the Atmospheres stuff. I'd like to eventually do a 'making of' for this track, but in the meantime I have a new e.p. out so look out for that in a forthcoming post.

As previously mentioned, the Atmospheres_Part I e.p. is available as a free download via bandcamp. If you'd prefer to just snag this track, you can find it on SoundCloud:

Posted by The Manitou at 2:18 PM No comments: