One of my current projects called for some experimentation with a miniature Slinky spring. For years it's been part of a lo-fi spring reverb that I built, which never worked very well (it needed a preamp). A friend of mine once told me he'd hooked a spring up to a contact microphone, and that's what gave me the idea to try it with the Slinky. So, a few minutes with some rubber bands, two microphone stands, some painter's tape, and a buffered contact microphone et voila: 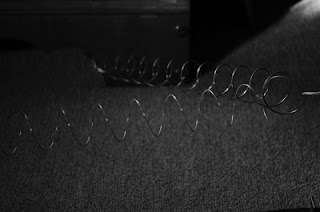 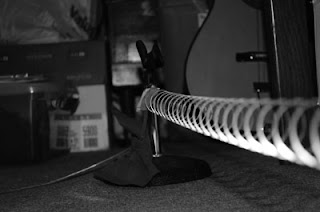 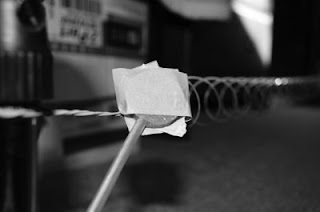 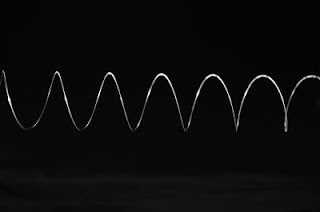 I hooked it up to my ART USB dual preamp, but found better results with the Arctic MC6002 mixer. I filmed some short clips using both setups so you can hear the difference:

My e.p. 'The Mechanicals' has been reviewed by Mark Barton in Tales From The Attic Volume XI. His missive is a regular feature in the independent music and culture webzine God Is In The TV. Here's what he had to say about it:

Somewhere here after a casual rifling through cyberspace we happened across this little curio. A soundtrack no less for ‘the mechanicals’ story distributed by broken sea audio recorded and composed by the Manitou better known to kith and kin as British Columbia based musician Joshua M Blanc. Classic BBC Radiophonic Workshop fair is what you get for your time and due diligence albeit updated and eyed from a mid 90‘s Warp-esque minimalist craft, a perfect companion for those of you who managed to nab yourselves a copy of Ochre’s very excellent ’music from the tenth planet’ set from a few years back and I dare say that very excellent ’the séance at hobs lane’ outing from mount Vernon arts lab. Steeled in chilled atmospherics that creep with a tension seeped carnival-esque sense of the sinister, there’s a playful fondness for that old school hide behind the settee flavouring seeping out of these cosmic fairground sounds as though an Orbital c. ‘the box‘ and latter career Add N to X had been re-visioned by Raymond Scott whilst peeking through the eyes of the Barron‘s especially on the opening ‘the mechanicals – part 1‘. Etched in sparseness and couched in hymnal chorals ice chipped in detachment ’part 2’ is hollowed with the same analogue artistry as befitted the work of landscape whilst ’insufficient data’ is detailed with an ominously spectral wood folk chill factor that imagines Philippe Petit located in some servile mechanoid nightmare dosed up on a claustrophobic soundscape icily chimed to a meeting of Carpenter and Goldsmith minds. Creepily cool in short. http://themanitou.bandcamp.com/

Posted by The Manitou at 2:19 PM No comments:

Email ThisBlogThis!Share to TwitterShare to FacebookShare to Pinterest
Labels: brokensea, Doctor Who, God Is In The TV, Mark Barton, review, Tales From The Attic, The Mechanicals 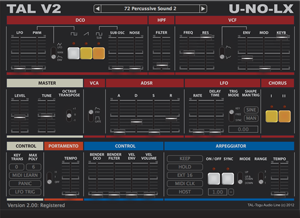 Having a hands-on approach to sound design, it's not often I call upon VSTs (virtual instruments) to create sounds. I prefer VSTs that emulate instruments impractical (or impossible) to fit in my home studio: piano, orchestra, medieval instruments, etc.... To a lesser degree, I sometimes use emulations of classic synthesizers that are frightfully rare and/or expensive. But regardless of how good they might sound, the fact remains that the controls are on the computer screen and I don't enjoy working that way.

That isn't to say a sound can be created more quickly on a hardware synthesizer, especially if it's a complex one and the synthesizer offers a vast array of sound-shaping controls. But the process is more enjoyable to me if I can physically turn a knob or push a slider rather than fumble with a mouse pointer. When a hardware synthesizer is relatively simple, well laid-out, and easy to use, and it's virtual counterpart is all of these as well, then it's cause for celebration.

You may recall I rescued a Roland HS-60/Juno 106S from a thrift shop last year (see this post). It's since become one of my favourite synths thanks to its sound and ease of use. It's by no means perfect: it has some quirks due to its age and mis-use by its former owner. I can work around them, and so far it's behaved well for all the use its got. But, as with any piece of vintage hardware, I can foresee a time when it will need repairs that are beyond my skills to affect. Furthermore, it weighs as much as a small planet, so it's not what you'd call portable! This is where VSTs have an edge.

Enter: TAL software's U-NO-LX, an emulation of the Juno 60: the predecessor to the Juno 106. Not a lot changed between the two models. There are a few differences in the controls, but the basic architecture and sound are much the same. The biggest difference appears to be the loss of the arpeggiator in favour of MIDI control. I suspect Roland thought MIDI was such a big deal that they didn't spend much time 'improving' the layout and circuit-design (they saved that for the follow-up, the Alpha Juno - more about that in a future post).

In essence, you can craft many of the same sounds with both synthesizers, and theoretically, with the U-NO-LX software. I'll leave in-depth sound comparisons to those more qualified. Suffice to say, that the U-NO-LX sounds close enough to my 106 to make no difference. Instead, I'm going to focus on a couple of points I've not seen covered in other reviews of this VST.

The TAL website states: it's not possible to save presets in demo mode. This is the only limitation of the free version of the software, but it's also more limiting than you might imagine. You may think, as I did, that you'd be able to create your patches from scratch and the settings would be saved as part of the project in your DAW. Not so: upon reloading your song you'll find the U-NO-LX reset to the basic start-up patch. The free version is only useful if you directly record the audio output, or use it in a live setting. That said, you do get to experience the 'full monty' without any annoying time restrictions or bleeps - unless they're bleeps you've coaxed out of it yourself.

Secondly, for a fairly simple synthesizer, it does hog a lot of CPU. My system, an Intel dual-core 2.4ghz with 4gb of RAM and Windows XP, is perhaps not the optimum environment for VSTs in general, but it holds up capably with most. Two instances of U-NO-LX running at once is about the maximum my setup can handle. Sonar, my DAW, relies on DXI (direct-x) technology so I have to convert any native VSTi's using a program called Cakewalk VST Adapter. I'm not sure how much of the strain, if any, can be attributed to this.

Despite this issue, I think it's a well-designed VST, modelled with due attention to detail. You even get the Juno 60's arpeggiator, which can be synced to your project's tempo, if you wish - and I do! As of this writing, the full version is $40 USD. I found the process of paying for it trouble-free and had my activation code within seconds of the transfer. Considering that a Juno 106 sells for upwards of $600 these days, and a Juno 60 even more, I think that's an exceptional deal. I find programming it as easy and enjoyable as programming my HS-60 (well, maybe not quite!) and have the peace of mind that if ever my beloved hardware fails me, I won't be bereft of its distinctive sound.
Posted by The Manitou at 6:30 PM No comments: