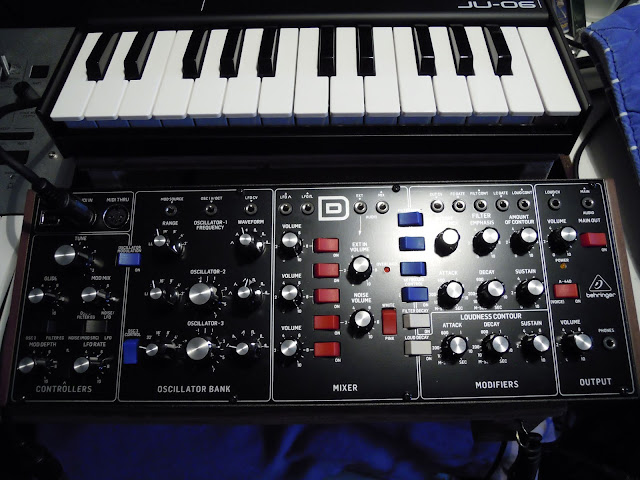 The picture above doesn't necessarily represent 2019, but you could say that work in the studio was somewhat chaotic. If you look back at my 'year in review' for 2018, you'll note I made some statements about my release schedule that didn't exactly fall into place. The Atmospheres album did eventually see the light of day, but very late in the year because of a busy spring and summer. My magnum opus Dreams of Sleeping Engines is still not out, but on the plus side I took extra time to fix some things I wasn't happy with.

-Collaborated with Disco Antenna on a cover of Bronski Beat's 'Smalltown Boy'.
-Mixed and mastered the 'Seven' EP for No More Cries (on which I also play keyboards and sing backup).
-Filmed a music video for No More Cries (still in post-production).
-Recorded Fender Rhodes and synthesizer for Meredith Higgins' debut EP 'Waves', release date TBA.
-Debuted The Manitou's 2014 album 'Radioatomic' on major download and streaming sites via DistroKid.
-Released The Manitou's album 'Atmospheres' via Bandcamp and DistroKid.
-Composed 11 songs for Sybille Muschik's Shoreline Studio Video Blog, subsequently released as an album titled 'Music of the Lake'. Filmed and edited 7 videos for Sybille's channel.
-Completed work on The Manitou's 'Dreams of Sleeping Engines', release date TBA.

What are my goals for 2020? Certainly to release the things that didn't make it into last year's roster; promote my music better; write a follow-up to Music of the Lake and continue with the filming work for Sybille's show; revisit some material from a 'lost' Manitou album from 2010; start work on some Audio Drama soundtracks I've been asked to compose; remaster portions of my back-catalog for DistroKid release; finish the No More Cries music video (and perhaps film another one). That would be a good start!
Posted by The Manitou at 12:04 PM 1 comment: