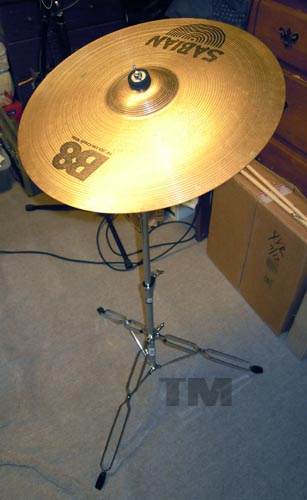 As well as using it in the conventional manner, I've done some close-micing experiments that yielded good results. Putting a microphone right at the edge picks up deep wobbly bass tones that are great for 'spacy' atmospheres. Playing it with rubber mallets produces a nice dark shimmery tone. The decay is indeed long. I wouldn't say that the 'crash' is particularly bright on this cymbal, but I've never owned one so I can only compare it to samples. This is also a used cymbal and has a degree of tarnish to it, which I'm told darkens the sound. It actually suits my work so I won't be polishing it.
Posted by The Manitou at 3:21 PM