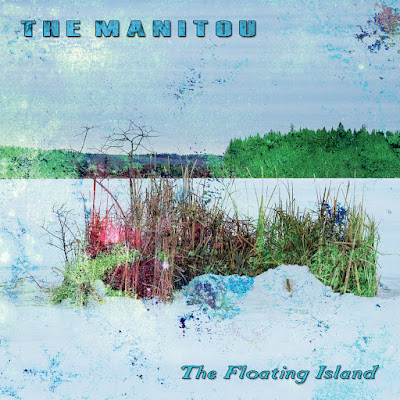 It's been almost two years, but I've finally completed a follow-up to Music of the Lake, my soundtrack to Sybille Muschik's ongoing Shoreline Studio series on YouTube. Originally it was to be "Music of the Lake II", but as the pieces aren't directly lake-related, it's named after the main suite on the album: The Floating Island.

The artwork is a combination of photography and gell-plate art combined in Photoshop, and features the floating island itself. It might not be obvious that the photo was taken in the middle of the lake: in the winter of 2019, when the floating island became frozen there. The photo was taken on my first snow-shoeing pilgrimage to it with Sybille, when it was still intact. In very short order someone set fire to it and drove a snowmobile over it, and it became rather sorry looking. When spring came, its journey continued and we lost track of it. We took several canoe trips in search of it, but never discovered its ultimate fate. It became such a point of interest to us that it made sense to write something musical about it for Sybille's show. I didn't realise just how monstrous an undertaking that would become...

As work progressed on Music of the Lake, my release from 2019, the songs shifted from short simple pieces to longer ones with more variation. Good examples would be Damselflies and the two Waterlily pieces. This was to avoid too much repetition when used for scoring: some of the Shoreline Studio episodes can run upwards of 40 minutes, and a thematic piece might be repeated several times throughout. So when it came time to create new music, I had two things in mind: to make the pieces longer and more dynamic, and to incorporate more of a world music flavour.

The Floating Island (suite) was the ultimate result of my efforts. It began simply as the first movement, and evolved into three more plus a reprise to tie things together. Some worldly instruments such as zither, udu, and log drums (all sounds from the Roland JV-2080 synthesizer) sit with the usual staples of bass guitar, analog and digital synthesizers, virtual piano & orchestra, and programmed drums. Electric and acoustic guitar also feature, as well as Behringer Model D for most of the lead parts. Field recordings from the lake and elsewhere were incorporated: including some ambiences from the lake in midwinter, and a massive thump made by the ice settling in spring.

Slide Zone - Not far from Bouchie Lake, in fact you have to drive over it to get there, is an area known as Knickerbocker hill, which used to be a rubbish dump and is now an active slide zone. The road surface is constantly shifting, and more and more of the supporting bank is disappearing into the river. If left to its own devices, the entire section of road will eventually disappear. This piece is about that.

Mining Relics - After the twenty-minute Floating Island suite was behind me, it wasn't my intention to write another piece that long. Then Sybille and I took a day trip to Wells, BC, to view and photograph a site where relics from the long-abandoned gold mine were unceremoniously dumped over the tailings pile (itself an imposing and interesting relic of the era). We spent perhaps three or four hours there all told, but I was inspired to write a piece of music that captured the essence of all I saw and felt there. So I set to work writing musical sketches, never quite putting my finger on the mood with any one piece. Thus it became another suite. As with The Floating Island, it was all compiled in a single multitrack project, which is a double-edged sword. On the one hand it allows you to have unifying elements across the entire project, on the other it becomes an organisational mess. Of the songs on this album, this was the most difficult to realise. Given the limited time on-site, I wasn't able to capture as many field recordings as I'd have liked, so I used what little I did gather and drew from my archive to provide metallic clangs and thumps. Style-wise, I drew heavily from Pink Floyd: for which I make no apologies. There ended up being a lot of electric guitar on this, and more Model D for the solos.

The Old Cabin (Golden Windows) - On the shore of Bouchie Lake sits a Victorian cabin. Around the time of the winter equinox, the setting sun illuminates the windows with golden light. I wrote this song about that, and my memory is that it came together quickly: almost as if channeled from somewhere. I chose instruments that reflect a sense of rural habitation, parlour dancing, and the ethereal nature of things left over from bygone days.