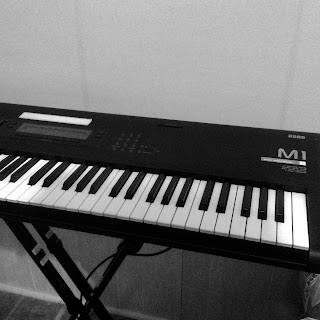 A decade ago I said I would never buy a Korg M1. My reasoning was that it was digital (at the time I had the misguided view that digital synths were bad), and that Gary Numan overused the M1 presets on everything he recorded from approx. 1988 onwards (since it was released, in other words). I even passed up the opportunity to buy one for $300 around the time I said that.

I've since come to appreciate what digital synthesizers can bring to the table. Interestingly, so have a lot of other people, and the price of these machines has gone up in recent years. Despite that, I still paid just shy of  $300 for this one. It needed a new internal battery and the presets reloaded, and has a few buttons that don't work, but other than that is in good condition. It was way cleaner inside than the DW8000 I had to restore recently, for instance.

So, what are my thoughts now that I own it? I still think it's an ugly machine, and I don't like the keyboard action very much. But overall the sound is decent, if dated. To my surprise, it has an on-board filter. It's more like a brilliance or brightness control (ie. not much depth to it, except in edit mode) but it's a mark in its favour. There are other things you can affect with the same slider control, too, such as the mix between the two digital wavetable oscillators of each sound. This makes it that little bit more endearing to someone like me who likes to create their own sound on a synthesizer, or at the very least change a preset enough that it has a unique flavour. A flip through the manual reveals that the designers expected the end user to program their own sounds with ease and relative quickness, but I wonder about that when there are so few controls on the front-panel.

At present I'm using it in my practice/writing space (along with the Reface DX). The piano sound is halfway decent, and there are other sounds that can inspire new ways of composing.